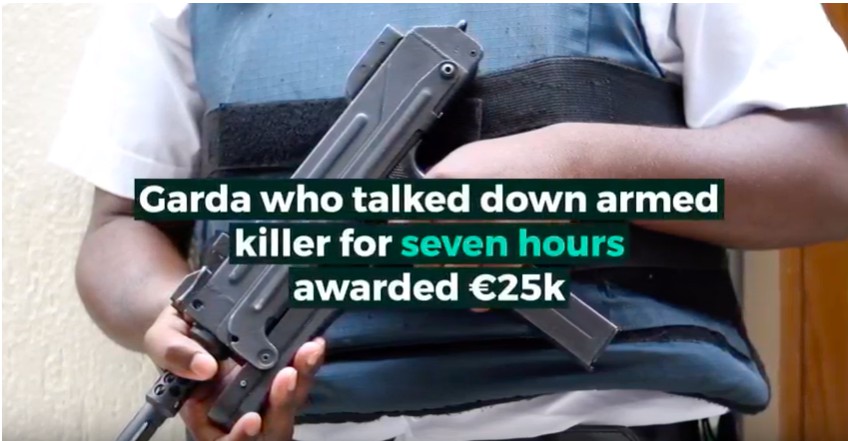 A Garda who spent seven hours talking down an armed man who had just killed his wife until he agreed to surrender has been awarded €25,000 compensation for emotional distress from the state.

The Garda was based in the north-east of the country at the time of the incident in September 2013. Counsel for the Garda, who has since retired from the force, told a Garda Compensation Hearing that her client had been on duty on the night in question when a phone call came in to say that a local man was suspected of killing his wife and was now holed up in a local pub.

The Garda, who had known the man in question for several years, went down into the basement of the pub to talk to the man. The man was in severe distress and had with him a bored-out double-barrelled shotgun.

The Garda remained in the basement talking to the man from 8pm until nearly 4am. At one point in their talks, the man pointed the shotgun at the Garda’s chest and pulled the trigger, but it had failed to go off.

The Garda eventually succeeded in convincing the man to surrender and exit the pub. He admitted to having killed his wife and was convicted of manslaughter and possession of the shotgun with intent in 2015. He was sentenced to 12 years in prison.

Counsel for the Garda told the hearing that he had not taken any time off work between the time of the incident and the time of the criminal trial in 2015, saying that he made very little of the success of his achievement and even less of the post-traumatic stress which followed, which he kept to himself for years.

It was only when watching the scene repeated in CCTV footage at the trial that the effects of the incident finally hit him, leading him to seek counselling in the years that followed.

The judge at the hearing awarded the Garda €25,000 for his emotional distress, noting that he had “been very honest and understated in his evidence.”

*In contentious business, a solicitor may not calculate fees or other charges as a percentage or proportion of any award or settlement*